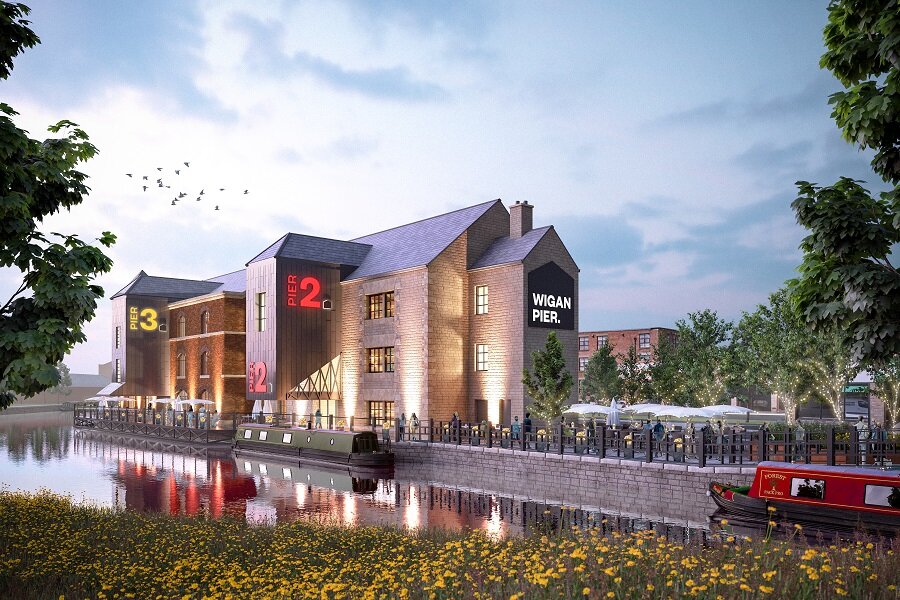 The AHF (the Architectural Heritage Fund) today announces the first grant awards through the Transforming Places Through Heritage fund, new funding from the Department of Culture, Digital, Media and Sport focused on reinvigorating England’s high streets and town centres.

Grant awards of £527,980 have been given to 15 projects. Those projects capture a range of plans and proposals to reinvigorate high streets and town centres right across England, all led by charities and social enterprises. They demonstrate creative, community led approaches, ones that will help stimulate fresh demand, provide new spaces for a range of activities and help bring back lost footfall.

The first awards include grants to the following projects:

A project development grant will help the Friends of Stretford Public Hall (FoSPH) develop the next stage of capital regeneration plans at the Grade II former music hall. Since securing the freehold, FoSPH has renovated part of the ground floor with over 30 co-working and studio tenants and by increasing cultural activities and classes. A community share offer raised £256k, with over 800investors, in just over a month. The next stage of the project is to modernise parts of the building, making it the largest cultural space in Stretford. The Hall’s regeneration fits into a wider approach to the town’s regeneration, one being led by the local authority through its Future High Street Fund bid.

Through an innovative partnership, this project will reinvent Wigan Pier as a national cultural destination and re-establish it as a civic asset for the town, becoming “a place where Wiganers of all ages will relax, eat & drink, be entertained, celebrate their important life moments and create lasting memories”. The project is led by Arts at the Mill CIC, an organisation that led the regeneration of the town’s Old Courts, which now hosts over 2,000 annual events and attracts 140, 000 visitors a year. The project will see the regeneration of Pier 2 as a performance & live-entertainment space, Pier 3 as a multi-purpose events venue for private hire, while Pier 4&5 will be a large, open-plan ‘street-food’ market with food vendors, a gin distillery, micro-brewery and taprooms. The project development grant will support the detailed development of the capital proposals at a vital time for Wigan which is the focus of both a Future High Street Fund bid and has been selected as a High Street Heritage Action Zone.

The aim of St Ives Community Land Trust is to ‘Promote community-led sustainability and resilience through working together to provide affordable homes and/or workspaces’. This project proposes to create two 1-bed flats and four 2-bed flats in the former vicarage of St Ives. The town has lost considerable housing stock to the second homes market, which has dramatically pushed up rents and sale prices across the town and wider area. This is in turn affecting the town’s vitality and liveability for local residents. The project development grant will support the costs of the project manager and other team costs to deliver the capital project, the funding for which is now largely in place. St Ives is a shortlisted Towns Fund area.

The HR Jackson Building is located in Bradford City Centre’s Conservation Area. It was built in Bradford’s retail boom during the Victorian era, as an up-market department store, of which there were many in Bradford’s ‘top of town’. FUSE is a charity with a track-record, both locally and abroad, for delivering high quality arts programming focused on emerging artists. Their proposal for the HR Jackson Building is to create a community-led modern art space, including a gallery, events space, café/bar, microcinema and art studios. This area of the city centre is currently benefiting from a Townscape Heritage Initiative, funded by the National Lottery Heritage Fund. The city is also bidding to become City of Culture in 2025. The project viability grant will fund early stage capital development and design work.

“High streets and town centres are at the heart of our communities and we want to see them thrive and prosper. This new fund is part of a wider £110m commitment from Government to breathe new life into our high streets, and I know the 15 heritage projects announced today will play an important part in doing just this."

“This is an inspiring range of projects receiving awards in our first round of Transforming Places through Heritage. The projects include a real mix of uses and proposals – from community led housing to new arts spaces – that will lead to the regeneration of historic buildings on high streets and in town centres across England. We know that social enterprises and charities can be instrumental in reinvigorating towns and high streets and in helping reimagine the role these places and spaces can play for 21st century communities. We’re really looking forward to working with all these projects as they develop.”

The Transforming Places through Heritage fund is aimed at community businesses, social enterprises and charitable ventures, which are uniquely equipped to develop creative new ideas for bringing life back to old buildings, increasing the mix of uses and diversifying ownership. The programme forms part of the Government’s approach to the future of the high street, which also includes the Future High Streets Fund and High Street Heritage Action Zones.

The fund provides a range of funding for projects at different stages of development - whether just starting out, ready to move forward with their plans, or starting restoration of a building – and is open for applications on a rolling basis. Our expert team of Programme Officers and consultants also support projects in their development.

Grants can range from a few thousand pounds for viability studies, to up to £350k for a limited number of transformational projects.

More details on how to apply and project eligibility are available at http://ahfund.org.uk/tpth