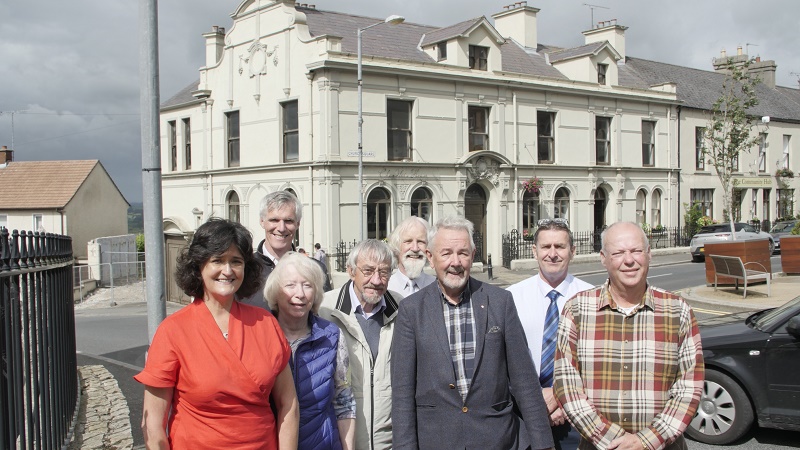 Rathfriland and District Regeneration Company (RDRC), based in Northern Ireland, have an extensive track record in community-led regeneration. Now, they are embarking on a new project to transform Chandler’s House into a community arts and entertainment space and four affordable housing units, in the hopes that it will bring people together and inject life back into the heart of the village.

This B1 listed former Bank of Ireland building has a distinctive decorative stucco façade. Beginning life as a candle making and soap factory (Chandler’s), it was later turned into a pair of mid-19th century houses, one of which was converted to a banking hall in 1875. Both houses were remodelled in the early 20th-century to form the bank and the bank manager’s house, which remained in operation until 2013 when the branch closed.

The building was purchased by RDRC in 2014, who utilised the ground floor space while they worked to establish the need and demand for its proposed end uses.

During the beginning of the pandemic, the group packed up potatoes and other local farm produce in the banking hall and distributed food and vouchers to those in need within the community.

The Architectural Heritage Fund is delighted to have supported this project since June 2020 with a Project Development Grant, followed by a more recent Capital Works Grant and a Heritage Impact Fund loan, bolstering the investment secured as a result of the Village Catalyst pilot - an innovative partnership between the Department of Agriculture, Environment and Rural Affairs (DAERA) and the Department for Communities (DfC). This funding has enabled the dynamic local group to develop their plans to create affordable and accessible local facilities, in turn supporting the social and economic regeneration of this rural village.

“Rathfriland & District Regeneration Co Ltd believes that the redevelopment of Chandler's House has the potential to make a huge difference to the village and the lives of local people and we are very grateful to AHF for their support.”

“We are very pleased to be supporting Rathfriland and District Regeneration Company with their plans for Chandler's House. Not only will this scheme regenerate a key building within the village, but the project will deliver significant social impact within the local community; the efforts of the organisation during the Covid crisis are an excellent example of this.”